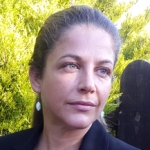 Short bio
Ana Rhodes Castro has been living and working in the Findhorn Foundation since 1994. During this time she has worked in a variety of areas within the organisation. She has been a member of the Central Management team over the last nine years, six of those spent being responsible for the area of Spiritual and Personal Development. This consisted of internal trainings, conflict facilitation, supervision and other internal structures that support the Findhorn Foundation to function gracefully and efficiently at an individual and collective level. In February 2009 she stepped into the role of Chair of Management/Focaliser of the Findhorn Foundation.

One of Ana’s greatest passion is maximising the inherent potential of individuals, groups and organisations in a way that is supportive and enhances the natural leadership that lives in people.

Ana is fluent in both Spanish and English and regularly runs trainings and offers consultancy in Spain, the UK and South America.

Ana is an organisational consultant, trainer and supervisor, working with individuals, teams and systems of up to 400 people.

She is the founder of a center dedicated to the Transformation of Human Conflict in Madrid (CTCH www.transformaciondelconflicto.es) in Spain, which runs long term trainings in conflict facilitation, leadership and escalated violence.