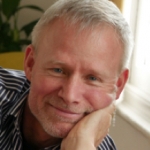 Short bio
Jaap specializes in group dynamics and collective wisdom as expressed in his book World Wide We (2004). He trains supervisors, executive coaches and leaders both in the UK and abroad. He also counsels individuals and couples in the UK. He is a COSRT accredited psychosexual and relationship therapist, a NCP accredited therapist and an experienced executive coach.
Jaap lived for many years in Amsterdam and there he received his primary training through an internship with Thale Bout, one of the first successful personal development trainers in the Netherlands. He also published a cookbook to ‘awaken’ the stomach (The Tao of Mashed Potatoes, 1999).  He has a B.A. in Cultural Anthropology and in Religious Studies and is also an accredited Interfaith Minister. In an earlier incarnation he was part of the artist duo Tempi & Wolf, with many international exhibitions and installations to their name.

Personal quote
There is neither destiny, nor free will. Ramana Maharshi