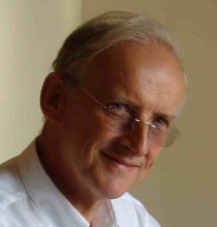 Short bio
James Leachman was a priest-monk of the Abbey of St Benedict in Ealing, West London. He died 29 August 2021 in London.

He held a Bachelors Degree in Joint Honours Botany and Zoology from Durham University, a Master of Arts from Oxford, a Master of Theology from Heythrop College, London University and a Licence in Sacred Liturgy from the Pontifical Institute of  Liturgy (PIL) at the Athenæum of Sant’Anselmo in Rome.

His Doctorate in Sacred Liturgy (SLD), also from Sant’Anselmo was on ‘The Liturgical Theology of Initiation and Eucharist in the Writings of Dom Gregory Dix’. He has been tenured associate professor (extraordinarius) at the Pontifical Institute of Liturgy. He was on the editorial board of Ecclesia Orans, the Pontifical Institute of Liturgy’s bi-annual periodical, was twice elected member for four year terms of the Council of the Dean of Liturgy, and member of the Faculty Council. He has regularly taught Liturgical studies at the Beda College in Rome, at Ealing Abbey and elsewhere, and was a regular contributor to Ecclesia Orans and to Studia Liturgica.

In 2007, with Fr Daniel McCarthy OSB of St Benedict’s Abbey, Atchison, Kansas, James founded and directed the project Appreciating the Liturgy and the publications series “Documenta rerum ecclesiasticarum instaurata” in which they had already published two books.

In September 2010 with other founding board members, Abbots Martin Shipperlee, Cuthbert Brogan of St Michael’s Abbey, Farnborough, Fr Daniel McCarthy, OSB,  Fr James, announced the establishment of a new Institutum Liturgicum in England and Wales. In 2012 he was made visiting professor at KU Leuven and in June 2015 became professor emeritus of Pontifical Institute of Liturgy, Rome.

He was co-founder in 2014 with Daniel McCarthy of the project, Generative Communities, which brings together liturgists, Benedictine leaders and social scientists.

Personal Quote
“Grow for ever – continuing to live and grow from the beginning to the end of our lives.”